David Livingstone was born in 1813 in a village near Glasgow.

When he was ten years old, he had to take up work at a cotton mill, as the family was very poor. Even at that time David was eager to study. With his first money he bought a book in order to learn to read. 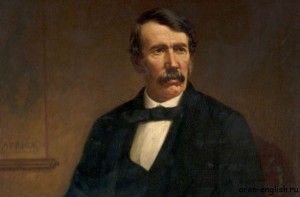 He was particularly interested in nature, and soon he knew the name of every wild flower, bird and animal that he could see around him. He was a great reader of travel books, and they filled him with a great desire to travel and explore.

In his twenty-eighth year he left England for Africa. On his arrival there he set out on a tour north, accom­panied by one white man and a native party. It was a very difficult country to travel in, but he soon won the trust of the natives with whose help he moved on rather quickly. He had many escapes from wild animals, and once he received a wound which left a mark on him for the rest of his life. A lion jumped out from behind some bushes, seizing Livingstone by the left shoulder. It brought him to the ground, but the natives were quick and killed it before it had done a great deal of damage.

Livingstone continued his journey. How he managed it is a wonder, for no white man had ever set foot in those parts. He suffered many hardships, yet he would not think of returning. He soon discovered Lake Ngami, the Victoria Falls, the River Zonga, and made maps of the territory.

In 1856 he came home to England for a short rest. In fifteen months he returned to Africa. He was particu­larly interested in exploring the River Zambezi and its tributaries. During this journey he had news of his wife’s death and although he was very sad he continued his work. In 1864 he paid his second visit to England, this time as a famous explorer. At the age of fifty-two, however, he sailed again, for the last time, to Africa.

Livingstone’s two previous journeys had ended suc­cessfully; this one was to end in tragedy. He started from Zanzibar, and had not gone very far before trouble began. Many of his followers left him, taking with them his medicines and most of his other supplies. They invented a story saying he had been killed by natives and they had escaped. 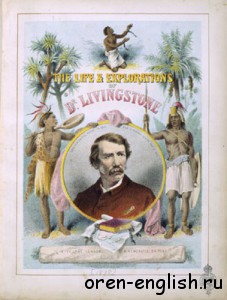 A search expedition found no trace of him. There were some people, however, who refused to give up hope. Livingstone, very sick, pushed on and made many new discoveries. Once, as he was resting in a village, he heard an English voice again. His servant Susi came running to tell him the news, and a few minutes later the white man appeared. It was A.M. Stanley, who had been sent by an American newspaper to get information about Livingstone.

Stanley did his best trying to make Livingstone return with him, but the latter would not agree. So, after spending four months together, becoming good friends and exploring-700 miles of unknown territory, they parted. Livingstone, with fresh supplies, continued his work, but not for long. In a village near Lake Tanganyika he died on May 1, 1873. His followers removed the heart, accord­ing to their custom and set out to carry the body to the coast. Their journey is a remarkable feat. Even the British search party who met these brave followers towards the end of the journey wanted to bury Livingstone there, but Susi insisted, and because of his great courage Livingstone is buried in Westminster Abbey.