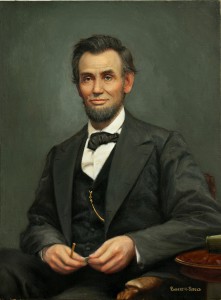 The Lincolns were hardworking pioneers. They moved frequently, always looking for a better farm. Abe and his sister Sarah had to work on the farm, so they usually could not go to school.

In fact, Lincoln later said he had only a year’s schooling. But even without school, Abe learned quickly. He liked to read and would walk miles to borrow books. He amazed neighbours with how much he knew.

Abe’s mother died when he was nine. A year later, Abe’s father married Sarah Bush Johnston, a widow with three children. She was a loving mother to the Lincoln children. She encouraged Abe in his learning. He grew strong and tall. By the time Abe was 20, he was 6 feet, 4 inches tall.

By self-education Lincoln became a lawyer. He prac­ticed law, and also met Mary Todd. They married in 1842 and had four sons. But only the oldest, Robert Todd Lincoln, lived to adulthood.