Michelangelo Buonarroti was one of the most famous artists in history. He was a painter, a sculptor, an architect, and a poet. He created some of the world’s most beautiful and most famous paintings and statues. 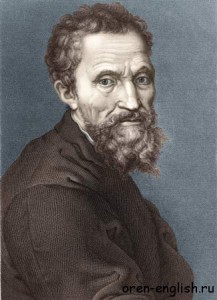 Michelangelo was born in 1475 in the Italian town of Caprese, near Florence. His family didn’t want him to become an artist. But at the age of twelve, he began to study art with a well-known artist. He learned to draw by copying paintings by other artists. He soon became inter­ested in sculpture, too. At age 21, he went to Rome and began to create the works of art that made him famous.

Michelangelo’s first great work was the Pieta. This statue was finished around 1500. It shows Jesus in the arms of the Virgin Mary after his death on the cross.

Michelangelo then went to Florence, where he pro­duced his famous statue of David. It is 18 feet high and carved from a solid piece of marble. The statue is so lifelike that it seems ready to spring into action.

In 1505 Michelangelo returned to Rome to work for Pope Julius II.