R.Burns was the greatest poet of the 18th century. He is famous all over Scotland. One has only to speak to Scotchmen to feel the deep love and admiration for their outstanding countryman. 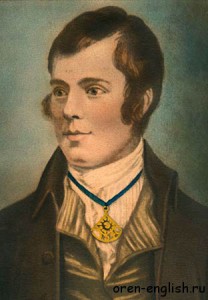 R.Burns was born in the picturesque village of Alloway. His father was a poor farmer, but it was from his father that Robert received his learning and his love for books. His mother had a beautiful voice and taught him old Scottish songs and ballads, which he later turned into his best poems. At the age of 13 Robert began to work on the farm together with his father. Robert was a handsome young man, but he often suffered from illnesses because of the hard work and bad food.

After his father’s death the young poet had to support his large family. His farming was a failure and he thought of leaving for Jamaica. In 1786 a few friends of Robert helped him to publish his first volume of poems. As the book was an immediate success, Robert Burns went to Edinburgh. He came into contact with some literary circles.

to suffer from — страдать от

to be a success — иметь успех