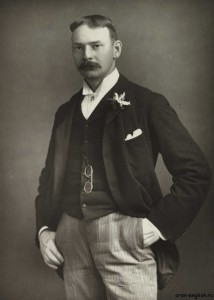 In the history of English literature Jerome K. Jerome occupies a modest place. He cannot be compared with such literary figures as Dickens, Thackeray or Bernard Shaw, but he is well known as a writer-humorist not only in his country but in other countries too.

Jerome Klapka Jerome was born in England, on May 2, 1859 in the family of a ruined businessman. The family moved to London, but there too the father was unsuccess­ful and could not pay his debts. Jerome’s childhood was poor and sad. He could not finish school because his father died in 1871 and the boy had to begin working to support his family. With the help of his father’s old friend he got the place of a clerk in the London Railway Office and received two pounds a week.

Office work did not interest Jerome, and he took up teaching, journalism and acting. For three years he was an actor, first in amateur performances, later at small theatres. He had to play different parts. In “Hamlet”, as he wrote about it later, he had to play all the parts except that of Ophelia. But he had very little money and often went hungry and had no place to sleep in.