“Flying round the Earth in the space-ship I

saw how wonderful our planet was. People,

let us preserve this beauty and not destroy it!” 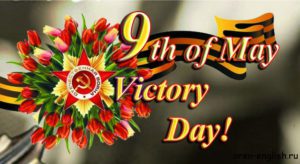 During the war my grandfather was an officer of the Soviet Army. He fought many heroic battles and marched as far as Berlin. On May 9, 1945, the war was over. Everybody was happy. It was the greatest victory of the Soviet people. “Let’s make May 9 our meeting day”, the soldiers and officers said. “Let’s meet every year in Moscow in Red Square”. And so they do now. It has become a tradition dear to them all.

My grandfather took me to Red Square. I was happy to see thousands of war veterans who were in Red Square on Victory Day.

The first place we went to was the Tomb of the Unknown Soldier. Everybody wanted to honour the memory of those who died to defend peace and happiness of our Motherland. We took our place at the end of the long line and walked slowly to the memorial. We moved along the alley and first saw blocks of red stone with earth from the Hero Cities. The people brought a lot of flowers to the memorial. We honoured the memory of the heroes with a minute of silence. We watched the soldiers on duty; we saw the Eternal Flame burning at the monument. We read the great and simple words: “Your name is unknown, your feat is immortal!”

My grandfather and his friends remembered the hard days of the war, and I listened to their stories with great interest. I invited one of my grandfather’s friends to come to our school.

What a wonderful day it was! My schoolmates and I greeted the war veteran with flowers. He told us about heroic battles and about the Victory Parade which took place in Red Square on June 24, 1945. Moscow welcomed the war heroes. Soviet soldiers threw 200 enemy banners at the foot of the Mausoleum.

We shall always remember what our grandfathers have done for peace on the earth. We shall do our best to live in the peace and friendship with all peoples.