More than 50 years have passed since the end of the war, but Victory Day is the Most Sacred Holiday in Our Country. 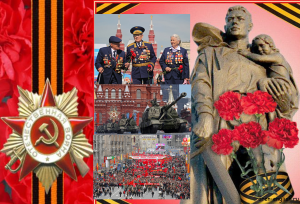 The Great Patriotic War was the most difficult trial for the Soviet people and their armed forces. The Soviets rose up in arms to defend their motherland and the entire country became a single military camp. The Soviet soldiers defended every inch of the Soviet soil displaying unprece­dented courage and heroism.

The rout of Nazi troops in the battle of Moscow initiated the turning point of the war. The myth of Hitler Wermacht’s invisibility was shattered. After extremely heavy fighting the enemy was smashed at Stalingrad, Kursk, Oryol, Leningrad, in the Ukraine, in the Baltic republics — these victories in 1944 led to the complete liberation of our country from the Nazi’s aggressors.

In 1945 the Soviet army carried out military operations of a great score and results including the battle for Berlin — the capital of German fascism. The Soviet soldiers drove the Nazis out of many European countries.

On the 8 of May the Nazi generals signed the act of surrender. On that day the world learned of the final victory of freedom-loving nations over German fascism. The victory was the result of the tremendous efforts of nations and armies of all countries of the anti-fascist coalition.

The greatest contribution of all was made by the Soviet Union, by its people and army. The cost of the victory was extremely high. The war claimed over 50 million people and 27 million only in this country. Not to forget the past means not to forget people. Names that have entered history remain with us forever.

Our memory is the best reward to the living and the fallen. So our sacred duty before all those who gave their lives for freedom and independence of new generations to come is to prevent another war.