After two years Dickens’s father managed to get some money. He now could leave prison and send Charles to a private school. After his school days Dickens became a clerk in a lawyer’s office, and in his spare time studied shorthand. When Dickens was nineteen he became a reporter for a newspaper, and his job was to attend the House of Commons for his paper. Also, he was often sent into the country, and his experiences on the road are found in some of his novels. 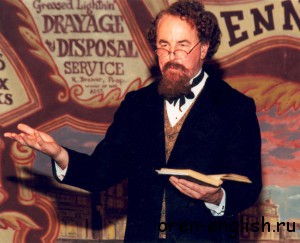 When Charles Dickens was twenty-five he wrote a sketch and signed it Boz. It was accepted by a magazine which printed another nine sketches. Later Dickens wrote more sketches for another magazine, and readers were charmed with their humour. Thus was born his famous Posthumous Papers of the Pickwick Club, and from this time on he devoted himself entirely to literature.

Oliver Twist (1838) and Nicholas Nickleby» (1839) made the fame of Dickens grow quickly. His fame con­tinued to grow with the publication of David Copperfieltf, Dombey and Son, Little Dorrit, Hard Times and The Old Curiosity Shop. However, in spite of the sparkling humour of his books, Dickens himself never succeeded in being completely happy. Family troubles, worry over his children and, most of all, overwork exhausted the great writer, and in 1870, at the age of fifty-eight, he died.

Dickens left behind him a long list of novels which have placed him forever in the first tank of English writers.