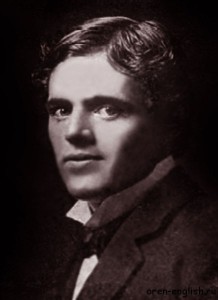 He began working at the age of eight. In the years that followed, he did a man’s work, though he was only a boy.

By the time he was twenty-two, he had lived more than most people do in fifty years. He had worked on ships and in factories; he had travelled across the ocean as a sailor, he had tramped from San Francisco to New York with an army of unemployed and back through Canada to Vancouver.

He had studied the great masters of literature, had read the works of great scientists and philosophers.

In 1896, gold was discovered in Alaska; and together with thousands of other men, London went to the new territory. He brought no gold back with him but he brought wonderful stories which he wrote on his return. They are based on the life he lived and on what he saw and heard in the frozen North. The collections of stories “Children of the frost”, “The son of the wolf’, “Love of life”, “The white silence” are gripping narratives of man’s struggle with nature.

Jack London is not pessimistic in his stories. A man may lose his own life in the struggle with nature, but life goes on.

In his great works, “The Iron Heel” and “Martin Eden”, London treats the problems of the individual and society.

Jack London’s realism is combined with sympathy and love for man in his struggle for life. It is this realism and humanism that made him the most popular writer in the world in 1913, and keep his writings as living and fresh today as they were at the beginning of the century.