The name of Mikhail Lomonosov is well known to everyone in Russia and in other countries. Maybe some­body doesn’t eve 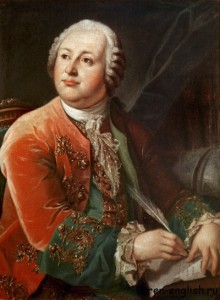 n know what discoveries he had made but every person knows that Lomonosov was an outstand­ing Russian scientist.

He was born in 1711 in a far away northern village. He began to study only since 11 years old. After 8 years had passed Lomonosov went to Moscow and entered the Academy. Then he was sent to St. Petersburg’s Academy and from there to Germany to study chemistry.Soon he became a great scientist.

Lo­monosov learned chemistry, physics, astronomy, history and literature. He created a telescope and with its help discovered that there is atmosphere around the planet Venus. It’s hard to believe that one man had made so many discoveries in different fields of knowledge.

He also learned geography. Lomonosov held lots of expeditions to far away parts of Russia.

He seriously studied the Russian history. Discovery of a colourful glass also belongs to this genius man. Depiction of Poltava Fight on the portrait of Peter the 1st made by Lomonosov makes a great impres­sion on people. He also wrote several odes and many poems. His dream was to build a University and in 1755 his dream came true. On his project was built Moscow University named after him.

The people of Russia will always remember this outstanding scientist.