I.N. Kramskoi (1837-1887), the famous painter, was also a publicist, art critic and theorist, the ideologist of the progressive artists of the latter half of the 19th century in Russia. 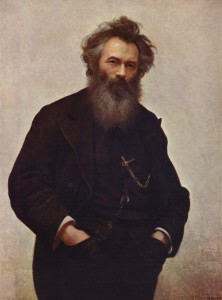 He was also one of the organizers of the Society of Travelling Art Exhibitions, to which the best of the realistic artists belonged.

Kramskoi was born in Ostrogozhsk, Voronezh Gubernia. As he was the son of a scribe, he had to start working early, and found employment as a retouched in a photographer’s studio. In 1857 he was accepted in the Academy of Arts in St. Petersburg.

Throughout his life Kramskoi struggled for a vigor­ous, national art expressing progressive ideas, and his influence on his own generation of painters was great. He was an untiring fighter against everything false in art, against art that existed apart from reality and from the interests of the people, and which he termed “a frivolous pastime of empty people and para­sites”. The best of his paintings are permeated with deep sympathy towards man and his inner life.