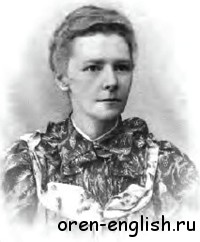 She was born in the family of George Bull, an Irish professor of mathematics. In her youth she had to experience many hardships. Under the influence of her husband, a Polish revolutionary named Mikhail Voynich, she got interested in illegal revolutionary work.

The action of the novel takes place in the 1830s and 40s. The main theme of the book is the struggle of the people of Italy for national independence against the Austrian rulers.

The main characters of the novel — Arthur Burton, Gemma, Martini — are the most active members of the secret society “Free Italy.”

Arthur Burton, an eighteen-year-old student of phi­losophy, makes up his mind to devote himself to the liberation of Italy. He thinks that God will help the people. However, betrayed by Padre Montanelli, the man he loved with all his heart, he realizes that religion helps the enemy. He leaves Italy for the Argentine, where he fights for the liberation of that country. He returns to Italy thirteen years later, taking up the name of Feliche Rivares, a journalist, who has a bad reputation of being ruthless to his enemies. He writes pamphlets against the church and signs them with “The Gadfly”.

The Gadfly is a man of strong passions and willpower. He loves life passionately, but he is ready to die for his ideas because they mean more to him than his own life.

His enemies execute him, but the book is full of confidence in the triumph of the revolutionaries.