To many readers A Farewell to Arms ( by Ernest Hemingway), fine novel of World War I serves as an introduction to Hemingway. 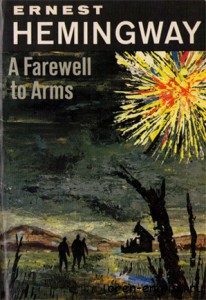 The book is a powerful anti-war story, but it remains a love-story, telling of the ill-fated romance between Frederic Henry, a young American serving as a volunteer in the Italian army, and Catherine Barkley, a British nurse.

Frederic Henry decides to get out of the terrible war and make a separate peace. He and his wife manage to get to neutral Switzerland where they are happy for a time. But the ending is tragic, for Catherine dies.

This novel shows Hemingway’s hatred of the world that “kills the very good and the very gentle and the very brave impartially”. It is very sad.

Here are the titles of some of Ernest Hemingway’s works with their Russian translations.