“The United States of America” is the name of the country composed of 50 states joined in a federal republic, and its citizens are known as “Americans”. 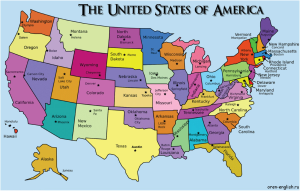 In the North the US is bordered by Canada, and in the South it borders on Mexico. It is washed by the Atlantic Ocean in the East, and by the Pacific Ocean in the West.

Hawaii, which became the 50th state in 1959, is situated in the Pacific Ocean halfway between the west- coast states and the Far East.

Alaska is separated from Russia by only about 50 miles across the Bering Strait.

The main part of the United States consists of several physical divisions, including highlands and lowlands re­gions. Major highlands are the Appalachian Mountain in the East and the Rocky Mountains in the west.

The Rocky Mountains extend from Mexico to Canada. The mountains are crossed by streams which flow through deep canyons and fall into the Pacific Ocean. The largest among them are the Colorado and the Columbia rivers.

These rivers are unsuitable for navigation. They are cut by rapids, and so serve as an immense source of electric power.

The central lowland between the two main mountain ranges makes up the basin of the Mississippi River. Its main tributaries are the Missouri and the Ohio Rivers. The Mississippi together with the Missouri form the longest river in the world (7,300 km).

The northern part of the USA embraces the region of the five Great Lakes (Lake Superior, Lake Huron, Lake Michigan, Lake Erie and Lake Ontario), which are connected by natural channels cut by rapids. The greatest of these rapids is the Niagara Falls.

Crossed by mountain ranges from north to south, the country is unprotected from cold winds from the north and from warm winds from the south. This causes great temperature fluctuations. On the whole, the USA has a continental climate.

The country is rich in coal, oil, iron and other minerals which form a solid base for the development of American industry. The United States economy is highly developed. In fact, the United States is one of the leading countries in the world economy. Such industries as min­ing, metallurgy, electronics and space engineering, chemicals, textiles, leather and footwear are well de­veloped.

Military industry plays an important role in the US economy.

As regards agriculture, both animal husbandry and arable farming are prominent in the economy of the United States.