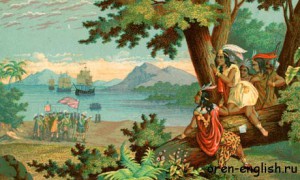 Christopher Columbus was an Italian, the son of a poor weaver. He was born in 1451 in Genoa, an Italian seaport.

From his early childhood he was interested in the big ships and would sit out-of-doors watching them for hours.

At last he felt that he could not stay at home any longer, and when he was still quite young, one day he went off to sea. He made many voyages and got more and more experience in sailing and navigation.

The seamen of that time did not sail very far. Their voyages were made mostly in the Mediterranean Sea, and they knew little of the Atlantic Ocean, which they called “The Sea of Darkness”, because they did not know what was in it or beyond it.

It was about this time that astronomer were declar­ing the earth to be a ball. This theory interested Columbus very greatly, and he made up his mind to put it into practice. He wanted to reach India by sailing to the West.

But how could he get the ships and the men? That was the trouble. He first went to England and tried to interest King Henry VII and his court. But his idea seemed so strange that they thought him mad and refused to give him any help.

The idea was received in the same way everywhere. Finally, however, the Spanish Government, being inter­ested in shorter trade routes to India, offered him three small ships and less than a hundred men so that he could try to carry out his voyage.