The Tower of London is one of the most popular historical buildings in London. 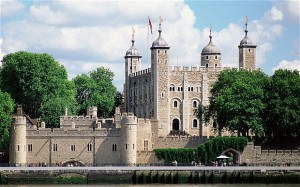 The Tower of London is the oldest palace, fortress and prison in Europe. 1000 years ago William the Conqueror decided to build a strong fortress to protect the City of London, which he had just conquered.

The Tower of London was one of the first and most impressive castles built after the Norman invasion of England in 1066.

There are 20 towers there, but the most famous is the White tower.

One of the main symbols of the Tower is huge black birds which are called ravens. Legend states that if the ravens were to leave the Tower the Crown will fall and Britain with it. The Raven Master takes care of ravens and feeds them raw meat. The ravens are not dangerous because they can’t fly away, their wings are clipped.

The Tower of London has been used for many purposes. It has been used as a royal palace, an observatory, an arsenal, a state prison, and many famous and infamous people have been executed within its walls.

It is now a museum. The beautiful jewels of the British royal family are on display there.

The security of the Tower is ensured by a military garrison and by the Yeoman Warders or “Beefeaters” who still wear their picturesque Tudor uniform.