Andrei Dmitriyevich Sakharov (1921-1989) was a distinguished scientist and a great human being. In the 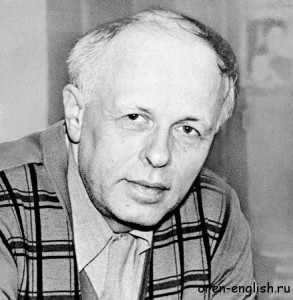 modern world heroes are hard to find, but they are essential to the improvement of society.

Andrei Sakharov was one of the best representatives of humankind. He could teach and inspire. His influence was consistent and increasing at the time of his untimely death.
Sakharov received the honour and glory of his country for his outstanding work in physics which led to the Soviet hydrogen bomb. He could have spent the rest of his life in wealth enjoying the respect of his countrymen, but when he saw abuse of power, he chose instead to use his prestige to fight the authorities who had recently honoured him.

He was treated with unbelievable indignity and cruelty. He was not allowed to continue his scientific work. He was exiled and he and his wife were denied needed medical attention. But he acted with strong willpower and firmness. It was hard to make him submit.

Many refused to accept Sakharov as a hero because of his soft and steady voice, untypical for this world of ours. He was without affectation, but firm and reliable.

To the credit of M.Gorbachev Sakharov was freed, and even allowed to travel abroad. Again that would have been a time to relax. Instead he continued to stand his ground — to struggle for democracy. He never criticized the system, however, without offering constructive pro-posals. He risked not only his career but physical harm by speaking out when too many others were silent. Nevertheless, his conscience and his civic duty, not his welfare, guided his actions.

Andrei Sakharov set a standard for the modern hero. Few will achieve his level, but many will fight injustice more fiercely because of his example.

Sakharov can be called a steady and lucid flame of the nation.

He was, for all his idealism, a profound political thinker.

People like Sakharov are marked with a seal of Providence. In a sea of immorality, someone has to carry the burden of providing an example of morality. It is a heavy burden. His life was a feat, his death, a soldier’s death, was symbolic.