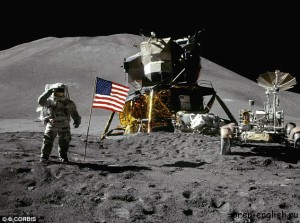 People all over the Soviet Union have followed with great interest the flight to the Moon of three American astronauts: Alan Sheppard, Edgar Mitchell and Stuart Roosa. The courageous spacemen have left more than a million kilometers behind them, and are now returning home with new scientific data on the history and the nature of Earth’s satellite, which we have all known for so many centuries, but which we have not known well at all.

Astronauts Sheppard and Mitchell spent more than 33 hours on the Moon, including two moon walks.

During the first walk they set up scientific instruments, collected rocks and took pictures.

Scientists in the American space centre had even greater hopes connected with their second walk: they hoped the astronauts would reach a crater, where they would collect rocks as old as the Moon, as old as the whole solar system itself.

But the climb to the top of the crater was so difficult that the brave astronauts had to return to their spaceship. When they got there, they could hardly stand on their feet, and they had to begin their trip back to Earth immediately.

And now they are on their way home. Though they did not succeed in all their scientific tasks, the expedition as a whole was successful. The Soviet people congratulate the courageous American astronauts and the scientists, engineers and workers who made their flight possible.